Kylar Broadus has spoken at numerous law schools throughout the country, including Harvard, Tulane, Temple, and Georgetown, as well as at a multitude professional and community conferences.
To book Kylar for a speaking engagement, email kylarbroadus@kylarbroadus.com

This panel discussion addressed violence against transgender women of color and explored ways in which we can combat this violence. Sponsored by Harvard Law’s Women’s Law Association, La Alianza, Lambda, and Students for Inclusion.

During Women’s History Month, the White House Office of Public Engagement and the Council on Women and Girls honored the achievements of women across the country and throughout history, while continuing the conversations about the challenges women across the nation still face. On March 31 — National Transgender Day of Visibility — Kylar Broadus joined leaders of the transgender women of color community during the White House’s first-ever discussion solely focused on the challenges this community faces. Community organizers, non-profit leaders, and policy advocates from all over the country shared their stories and spoke about the issues that uniquely affect transgender women of color. These frank conversations helped to shine a light on the work left to be done, and possible community and government solutions.

TransCon is a conference by Aqua Foundation for Women for the transgender community. It serves as a space to educate and empower the transgender community as well as allies. This year, topics included employment, dating, HIV, trans youth, trans equality, spiritual care and more. Kylar Broadus delivered the keynote presentation. Sponsored by Gill Foundation, The Miami Foundation, The Betsy Hotel and Pridelines Youth Services. 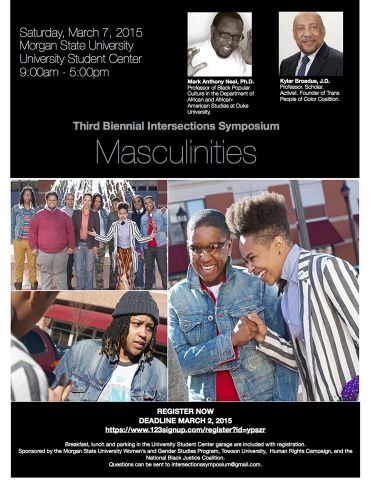 This historical symposium celebrated its third convocation (the first was held in 2011 and the second in 2013). The symposium was historic in that Morgan State is singular among Historically Black Colleges and Universities (HBCUs) in hosting an academic event that focuses the intersectionality of identity markers that include sexuality, race, gender, and ethnicity. The symposium brought together expert researchers from around the region. This year’s theme was “Masculinities,” and panelists spoke on a range of topics as they relate to the intersections of masculinity with sexuality, race, gender, and ethnicity. This year’s keynote speakers were Dr. Mark Anthony Neal, Professor of African and African American Studies at Duke University, and Mr. Kylar Broadus, Founder of the Trans People of Color Coalition. The event was hosted by the Women’s and Gender Studies Program (WGST) at MSU and was sponsored by MSU, Towson University, the Human Rights Campaign and the National Black Justice Coalition.